Skip to content
The young,energetic and actor, Tiger Shroff recently shares a video of himself working out passionately while flaunting his muscles. Tiger also shared his pictures of his back after his shooting in which he captioned it saying that they are first few scrapes and minor cuts from the battlefield and hopefully last as well.
Tiger is believed to be a complete fitness enthusiast who posses a well toned body, which can often be noticed in his amazing dance moves in his videos which he post and also in his movies, like the recent one ‘War’, Tiger Shroff is pretty active on his social media accounts as he keeps his fans updated through his frequent posts. 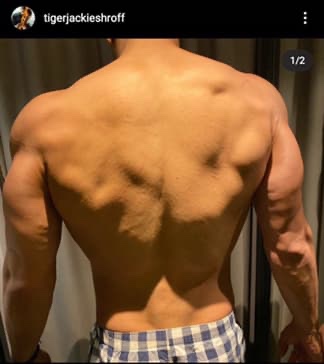 The actor is currently shooting his next upcoming movie ‘ Baaghi 3’ with his co-actress Shraddha Kapoor. The movie is being shot in Serbia, the movie is expected to release in the month of March 2020.
Share Article
< Rajkumar and Ayushmann create ultimate fun on the dance floor
> Taapsee Pannu gives a perfect reply for being asked to speak in Hindi