Skip to content
The well known designer Manish Malhotra of Bollywood, had his fathers funeral held this Monday morning. His father was deceased recently as he wasn’t keeping well for a long time. The funeral was done on Monday morning after which we spotted many of his close friends at his house. 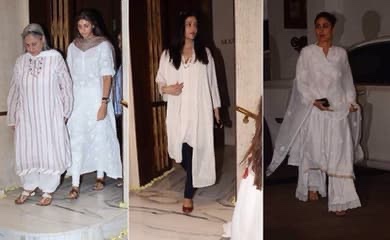 A day later they organised a prayer meet which had many celebrities from all over the B-town, for attending it. Alia Bhatt with Randbir’s mother Neetu Kapoor was spotted along with many other celebrities like Karan Johar, Sonakshi Sinha, Ravina Tandan, Disha and many more.
Share Article
< Sushmita Sen celebrates her 44th birthday
> First look of Manav Kaul in biopic of Saina Nehwal is out