Skip to content
Today we get to see an amazing throwback picture getting viral around the internet and grabbing everyone’s eyes. The throwback picture is of Shah Rukh Khan and Anushka Sharma which was taken from the sets of ‘Rab ne bana di jodi’. This particular movie ‘Rab ne bana di jodi‘ which was released in 2008 was the movie through which this beautiful actress Anushka Sharma made her Bollywood debut. 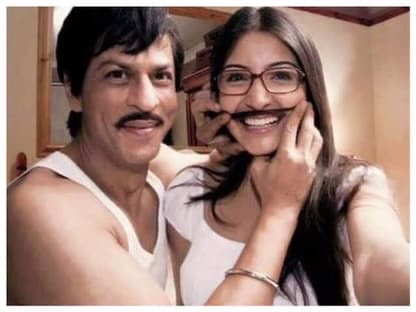 In the picture we can spot Shah Rukh Khan placing on a fake moustache on Anushka Sharma’s face as she is taking the selfie . Fans totally loved this gesture and have been loving this post shared on Twitter .
Image source- timesofindia.indiatimes.com
Share Article
< Popular filmmaker and producer are reported to collaborate with each other for 2019 Balakot Airstrike
> Ranveer Singh reveals on his role as Khilji in Padmaavat movie