Skip to content
An Indonesian actor Muhammed Khan recently got awarded for the best actor gong at Citra Pariwara Awards taking place in Jakarta. The actor in his acceptance speech said that he dedicates this to ‘King Khan’ Shah Rukh Khan. He also said that shah Rukh is the reason why he (Muhammed) became an actor. He hopes to meet SRK someday. 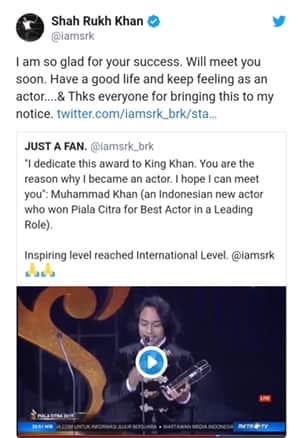 This video got viral after which Shah Rukh Khan who is in US currently replied on his Twitter by sharing Muhammed’s video and his lines that he said for SRK.  Shah rukh then wrote “I am glad  for your success. Will meet soon. Have a good life….”
Image source- Shah rukh khan Twitter account
Share Article
< Kalki speaks on her pregnancy says it has changed her habits
> Chhapaak trailer is out putting an intimidating and formidable impact