Skip to content
The well known director of the B-town industry who is known for his action, drama, mixed with comedy movie genre none other then Rohit Shetty replied to Ajay Devgn’s heartwarming comment. Ajay recently described his thoughts for Rohit, he said that his journey in Bollywood would have been incomplete without Rohit Shetty. He further added that Rohit joined the Ajay Devgn films as an assistant, and over the time he became part of the family. 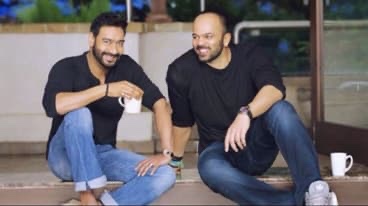 After such lovely statements from Ajay, Rohit responded by saying that his film journey would have been incomplete if Ajay wouldn’t have been a part in it. The duo has spent 30 years together, delivering some super-hit movies like the Golmaal franchise and many more.

Image source- IWMBuzz.com
Share Article
< Tiger Shroff on the sets of Baaghi 3 shares his pictures
> Kriti Sanon shared her dance video which she made on the set of Panipat